Our popular contributor Kara-Leah shares a tale from early motherhood on how every moment is an opportunity to wake-up, especially the difficult moments! 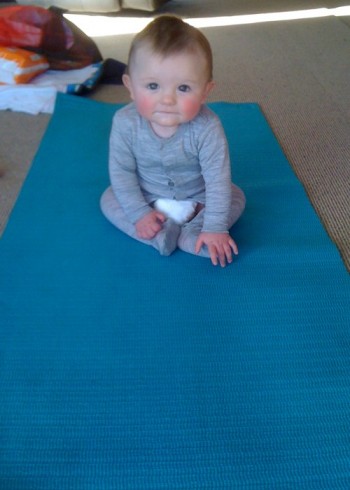 I wrote this article over four years ago now and re-reading it I’m struck by the spiralling nature of life. At the time I thought I’d learned something huge and could tick that off my to-do list. Being Present – Done!

However, over the last four years this kind of situation has repeated itself over and over again. Every time I get a chance to notice the pattern – the wanting and attachment to wanting, and the stress and struggle it causes.

Once I notice the pattern, I can let the holding go… but first I have to notice. I’d like to say that noticing is getting faster and faster, but sometimes it’s not. Sometimes I’m holding on for days and suffering for days before I notice what’s happening.

It’s a reminder that life is a process. We never truly master it. We can only master the moment, then that too is gone and it’s a new moment.

Here’s my tale of waking up in the middle of mothering.

Never more am I reminded that every moment is an opportunity to wake up than during a morning with a crying baby.

We came home last night from a week in the mountains to a cold, damp, empty house and discovered the fridge had been accidentally switched off and the kitchen was rank with defrosted fish bait. It’s been cold enough in Dunedin that most of the contents of the fridge are salvageable but the freezer’s a write-off.

No worries… open some windows, light some incense, get the fire cranking (yeah for a big bag of Glenorchy pinecones!). All this while juggling an unsettled, teething baby who’s content and happy as long as he’s being held. All plans to clean the house out the window. Instead, I resign myself to getting tomorrow night’s dinner on the go as a welcome home for my partner Luke.

Fifteen minutes prep takes about an hour as I struggle to find a place where Samuel is happy. None of the usual tricks work, and in my frustration, I’m not picking up on his signals as well as I usually do, which frustrates him.

But we manage. And by 7pm Samuel is down for the night, the house is warming up nicely, one load of washing is washed and the stew is stewing beautifully. So beautifully, I shift it to a smaller element at the back of the stove and turn it down below low so it can stew away all night.

Turns out that element only has one setting. Hot & high.

And in an attempt to warm up the rest of the house, I’ve shut the kitchen door and gone back to attend to Samuel who’s woken up again already. It takes a while to sort him out, and it’s not until I walk back to the computer to start wading through my inbox that I smell something burning. Confused, I think it’s the pot of tea I’ve made that’s now almost cold even though I haven’t had a sip yet. Then I think it might be the washing in front of the fire.

Finally I clue in.

I open the kitchen door to discover the rank smell of fish bait rotting has been replaced with the pungent smell of burnt stew. There’s a thick layer of smoke and steam hugging the ceiling and as I close the kitchen door to stop the smoke alarms going off, I hear Samuel start to cry again.

This is a moment when I’m almost affected.

I’m not known for my cooking skills and Luke is the chef in our family. Lately I’ve been making an effort to up-skill so taking the time to prepare something that takes two days to get to it’s most yummiest is a big step for me. And now it’s all burnt. I don’t have time to wallow though, as Samuel’s getting louder. Element off, pot moved, front door open to air kitchen, back to baby.

Later I try and save some of the stew, scooping off the top bits into another pot before scrapping the thick layer of burntness into the pig bucket. I’m dreaming though, a quick taste test reveals a la burnt flavour all the way through. Ah well, the dog will feast well tomorrow night. He won’t mind. (Turns out he does mind. Even the dog wouldn’t eat this stew.)

It was a new day this morning, and I had big plans as to what I was going to get done before Luke gets back later this afternoon. House cleaning and food shopping, dinner cooking and house plant re-potting. Not to mention article writing and website maintenance. And cleaning out the fridge and freezer. Plus that inbox that stills needs emptying. Phone calls to make. Bills to pay. And of course I’d love to get a real yoga practice in, an hour or so on my mat, as well as my daily sadhana.

All this while home alone with a baby.

My usually happy bouncy baby, content to jolly jump, or hang out in the walker, or play with his feet on the floor, or sit on my lap while I email… he’s instead a gripey, crying, albeit still adorable baby. Nothing seems to settle him except for me. And doing anything while holding a baby takes three times as long, if it can be done at all. Time is ticking by and my list is only getting longer.

It would be really easy at this point in time to get frustrated, pissed off, angry, upset… all because I can’t do what I want to do. I’d be suffering, Samuel would be suffering, Luke would suffer when he got home…

This is the nature of attachment. Of being attached to what we want.

I want to clean the house.

I want to get heaps of work done on my website.

I want to answer my emails.

I want to do a good long yoga practice.

In the midst of all the wanting, I’m missing the moment. I’m not even here. I’m right up in my head trying to shape this day to a script. What’s even worse, it’s a script of my making. I’m the only person putting deadlines and demands on myself. because I’m my own boss.

So at about 10.30am I surrender. I toss the big long list of wanna-dos out the window, into the fire, down the toilet and open up to what’s needed right now and how I can serve.

The feeling of relief is immediate and I notice how tense I’d been.

Samuel’s settled somewhat and is bouncing away quite happily in my arms. I take a chance and put him in his jolly jumper. He’s smiling. Jolly even. And there’s jumping going on.

Grabbing what I know will be a small window, I sit and start my sadhana. I’m on Day 57 of 90. It’s awesome. First up, 11 minutes of seated chanting and hand mudra in tandem.

I just make it to 11 minutes before Samuel’s had enough in the jolly jumper. I get him down and lie him in front of me to do the next stage while he fusses and works toward crying. I know I’ve got about 2 minutes – the jolly jumper’s given him an appetite.

Just before Samuel goes into full scream, I pick him up and begin breast-feeding while starting my timer for the next stage of my sadhana.

Three minutes of seated meditation while staring at the nose…

It’s more than three minutes this morning though, as I stay in meditation until Samuel falls asleep – nap time. Gently carrying him down to the bedroom, I’m not surprised when he opens his eyes as soon as I lie him down. Still one final stage of my sadhana to do, I jump up on the bed and sit cross-legged. Samuel watches me wide-eyed, but silent.

Inhale, hold, shake out the energy… and repeat three times…

Stare at the nose for twenty seconds… end on Namaste…

Samuel is still awake, but I can see he’s quiet and content. Me too. Just surrendering into the day, letting go of my attachment to that damn list has brought me back into the moment and suddenly it’s a beautiful day. I know what’s needed right now, for both Samuel and I. Remaining cross-legged on the bed I start to chant his favourite mantra, over and over again, playing with the sound, being mindful of the sensations inside my body, and watching Samuel watching me.

I can see he’s calm and present now, mirroring my calmness and presence, and it’s not long before he effortlessly drops off into a deep sleep.

I sit in gratitude for my small son, for my partner coming home this afternoon, for our warm house, for the sounds of the birds outside. Tears well up from inside as I feel the truth of something Stephen Archer emphasizes on his meditation talks.

You wake up right where you are

Not when you sort your problems out.

Not when the baby stops crying.

Not when you buy the perfect house.

Not when you get the perfect job.

I may never have got that hour long yoga practice on the mat, but what’s the point of practicing on the mat when we’re not taking every opportunity to wake up off the mat?

After all, isn’t that why we practice, so we can then put that practice into play in our lives?

She’s the publisher of The Yoga Lunchbox and published her first book, Forty Days of Yoga – Breaking down the barriers to a home yoga practice in 2013 and she’s almost finished revisions for her second book, The No-More-Excuses Guide to Yoga. She’s also a regular contributor to the Elephant Journal.

Surrender and Letting Go: Why ‘Ananda’ is the True Happiness
Scroll to top