Welcome to Part 12 of The Seeker’s Story, where Namit continues his exploration into yoga philosophy. This week, he discusses what balance means in the context of yoga and the road to enlightenment. 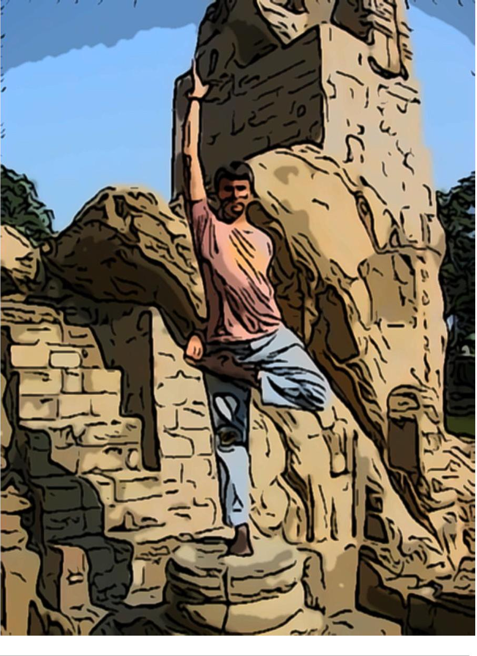 The next day I woke up early. I had decided I wanted to see the sunrise from the roof garden. How different the world looked under the light of day than under the light of the moon. The light gave everything a colour and it had the effect of making everything look so alive – the animals, the lake, the hills in the background. It was really entrancing watching everything awaken at that early hour.

I had been going to local dhaba or cafe kind of place for breakfast. The food there was all fried and really unhealthy so I asked them today if I could have some fruit and they obliged. As I sat eating I focused my attention on my breathing and just stayed in the moment. How happy and relaxed I felt that day.

Later on I came to the temple to meet yogi ji. He was balanced on one leg and had his opposite hand wrapped behind and holding his foot whilst the other arm was upright. I decided it would be years before I would attempt to do this.

Yogi ji came down and started talking. ‘Balance is very important in every aspect of life do you not think Jake?’

I thought about my busy life back at home and about how I was always juggling things around trying to fit everything in.

I now began to understand where yogi ji was coming from.

‘That makes a lot of sense yogi ji.’ I replied. ‘Yogi ji sometimes when people talk about yoga they use the expression hatha yoga. What does this mean?’ I really did not know enough about the Indian languages to figure out what hatha means.

‘It means sun and moon Jake. It basically tells us that yoga is about achieving a balance in life. It is a good question as it relates to what we are already talking about.’

‘Hey I always have good questions!’ I said with a cheeky grin on my face.

‘So in yoga you really do learn to achieve a balance in life. Always do everything at the correct pace Jake. Never too fast and never too slow. Never have so much money that you become greedy and obsessed by it but never have too little that you then starve from lack of it. Never eat so much that you become fat and immobile and never eat so little that you become too thin and weak. Always living life in balance is a big key to happiness. This way too you will never be addicted to anything as you see there are many things in life that bring happiness. You will not rely on any one thing to bring you happiness. You will learn to be content rather than addicted. And you will live a long healthy life rather than a short stressful one.’

‘I would like to live a long happy life yogi ji!’ I exclaimed.

‘Not just you Jake’ grinned yogi ji ‘it is what most people want.’ Okay Jake do you know the story of the Buddha? He lived in India centuries ago. Do you know how he found enlightenment?’

‘All I know is that he was sitting under a tree when he found enlightenment.’ I said, because to be honest that was all I knew of the story.

‘Well that is part of it Jake. Okay so up until that point in the Buddha’s life he had only known two things namely being rich and being poor. As a boy he had been raised a prince and he had only known riches.

When he grew up he crept outside his palace one day and saw suffering outside. This is when he decided he was going to find enlightenment and help people to overcome suffering. He studied with many wise men for years and he studied the same Indian philosophies that inspired the paths of yoga.

His fault however lay in the fact that he thought that to find enlightenment he would have to suffer hardships and be very poor. He basically let himself starve until one day he fainted. He then realised that he would never be able to help people if starved to death. He also realised that if he lived his whole life in a palace just eating rich food he could not help people and he could not find enlightenment. He decided then that he must follow a middle way. Not too much and not too little of anything. He ate an average size portion of a simple bowl of rice, then sat under the tree of enlightenment and he himself knew that at that point that he was ready to understand.’

‘So by keeping everything in balance the Buddha found enlightenment?’

‘Yes Jake. This is a golden rule for living a happy life.’

All of a sudden I realised something. A lot of my stress back at home had been caused by me wanting to do much, by me wanting to be too good at something or another. I thought a lot about what the yogi had taught me. I just had to be living a happy and balanced life. Not wanting to be doing too little but not wanting to be overdoing either. I certainly did not want to starve myself like the poor Buddha had done.

That day before yogi ji went I really thanked him from the bottom of my heart. I really felt like I was learning how to be relaxed and calm. I was starting to feel as happy as when I was a boy playing in the back garden at home. Yogi ji had such a big smile on his face before he left. He knew that he had shared something precious with a friend

I sat underneath a tree by the lake and giggled to myself as I wondered if the amount of rice I ate at dinner that day would determine if I became spiritually enlightened or not. I concluded that it would take a lot more than rice to make me enlightened.

That night I talked to the family about the people in the village, about how they never seemed stressed, about how they seemed not to strive too hard to do anything, but they still made sure that the essentials were done. The villagers to me all seemed to be living life in balance.

Mr Rai agreed with me. ‘It is the secret of happiness Jake. Live a good, honest life. Do not work so much that you forget about your family and do not work so little that you cannot provide for them. Everything in balance brings you happiness. And have faith in God and faith in goodness’ he said.

How could such simple village people in India have so many beautiful sayings and beautiful secrets I wondered to myself. I was happy and I was in good company.

Psychic Powers – How You Can Get the Siddhis Safely

What do Yoga and Physics Have in Common?
Scroll to top