Our popular contributor Kara-Leah shares one of her favourite and most useful home yoga practice books. 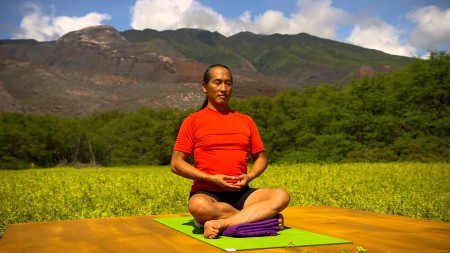 Searching for the perfect book to accompany your home yoga practice? Yoga – The Poetry of the Body by Rodney Yee with Nina Zolotow may just be it.

There is an authenticity that permeates the words of Rodney Yee’s book. He may have chosen to use a writer in the creation of the book, but instead of just using her words to explain his concepts, Rodney includes conversations between himself and his writer, Nina Zolotow. Together, student and teacher, professional writer and verbal poet, they explore the nature of yoga.

It’s a superb literary device that gives the exploration of yoga on and off the mat a grounding in the day-to-day life experiences of an intermediate practitioner and an experienced teacher.

Nina shares many experiences that readers of the book will relate too – experiences they too are likely to be having as they make the transition from class attendee to home practitioner.

Nina also provides a sharp foil to Rodney – calling him out when his passion and emotion arises due to the nature of the discussion. Until Nina says something, it’s not always obvious from his words that he’s getting angry. She catches the yoga teacher being human, and it dissolves the sense of separation that can exist sometimes between teacher and student.

It’s gratifying to hear Rodney get angry with scientists that won’t acknowledge the power of yoga because it hasn’t yet been proven according to their methodology.

It reveals his passion, and his humanity, plus reassures that he’s not wearing a cloak of spirituality. This is a guy who’s passionate about yoga and life; he’s not trying to be anyone in particular.

It’s also gratifying to see Nina ask him why he cares what they think.

Rodney squirms under her spotlight, eventually stating ‘What bothers me, bothers me’. Nina wants to know why, Rodney says it doesn’t matter, what matters is noticing how the resistance feels.

It’s a brilliant use of their conversation to show us what yoga is truly all about – not telling us, this is what yoga is – but showing us. It’s also the reason the book stands up to repeated readings.

Poetry of the Body is the kind of yoga book you can pick up on a lazy summer afternoon and open at random to read. You may have read the words before, but guaranteed they’ll have a different resonance this time around. Likely too that the page you open to will have a nugget of wisdom just for you.

But this book is about more than words. The dialogue between Nina and Rodney wraps around eight short, accessible home yoga practices that any beginning yoga student could explore on their own.

The photos are clear, the explanations poetic, and the practices enticing. Who wouldn’t want to do a relaxation practice that allows forward bends while resting on a chair, or uses child’s pose while hugging a bolster?

More experienced practitioners will love the way Rodney always includes ‘One Thing’, a seed of an idea designed to take the pose a little further.

‘Search for a rising up from the deep surrender and gravity of your legs. Can you feel a strong buoyancy from their density?’

The practices are organized according to feelings, which is a divine way to begin to practice at home. We’ve all had those days when we’re feeling resistance to practice – perfect, dive right into the feeling of that resistance with a Resistance Practice centered around twists and long holds. Or if you’re just too exhausted to practice, try the Relaxation Practice.

Rodney wants you to get comfortable with building your own practice though – his eight practices are just starters to get you going. The last third of the book contains a library of postures, organized organically in the flow of a practice to help you understand how to sequence your own personalized practice.

Each pose has three of four photos, including modification and use of props, and often a photo showing direction of movement.  Rodney has added in his ‘One Thing’ here too, plus added an appropriate quote to give you an idea of the poetry of the pose. Like this for Half-Moon Pose:

One thing. You can be so directly on your bones that you can fly. If nothing else, dream it for a moment.

We use most of our energy holding up the illusion of control – it’s fictitious – it’s tiring.

The quotes aren’t attributed, so we’ll have to assume they come from Rodney.

With no obvious lineage ever acknowledged – although Rodney does talk about what Krishnamacharya says – this is a great book for any one who wants to start a home practice, regardless of what style.

It’s clear, easy to understand, has great alignment tips, is poetic and emotive, plus covers off on how a student’s yoga practice will evolve in time, both on and off the mat.

A Glimpse of Kundalini Experiences

How to Transcend Loneliness
Scroll to top