Our popular contributor Kara-Leah is a big believer in daily yoga practice – and with the end of the year just been, it’s the perfect time to consider making the ultimate New Year’s Resolution. 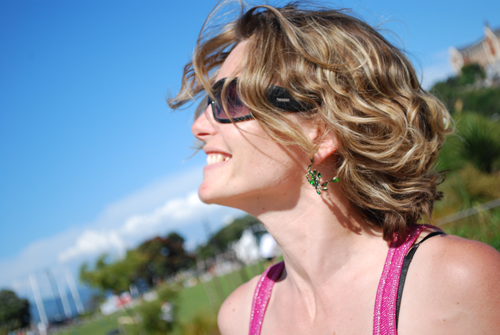 Back in 2009, with the inspiration of one of the many Kriyas that Anmol publishes on this website, I decided I was going to commit to forty days of Sodarshan Chakra Kriya.

You could almost say that was when the seed of my book, Forty Days of Yoga, was planted. It was the first of many forty day practices that I did, and it had a profound impact on me.

But it took me much longer than forty days. Yes, 94 days after I made a commitment to complete a forty day sadhana, I finally did my forty days in a row.

On my first attempt I missed a day at Day 35, and had to start again.

After a couple of false starts, I was back into it, and truly committed. I’d failed once, and knew this time what it took to complete the sadhana. Every day when I woke up, one of my first thoughts was,

“When am I going to do my sadhana?”

My sadhana become the one concrete action in my day that everything else had to bow down to – and this was good.

I looked forward to those eleven minutes (so achievable, barely the length of two add breaks, or two songs.)

I never knew what I would experience went I sat down to do Sodarshan Chakra Kriya, which consists of silently chanting a mantra – Mahay Guru – 16 times with the breath held in, and pumping the stomach three times to each chant. Not forgetting of course the 90% closed eyes focusing on the tip of the nose…

Sounds complex, but once you get the rhythm, it flows, allowing you to sink beneath the surface of the usual ego and mind concerns and start to observe the flow of prana within the body as it goes about it’s awakening process.

And that’s an incredible thing.

I first observed prana flowing in my body in late 2000, but had no idea what it was.

At the time, I was beginning to spend more time meditating, as well as practicing yoga sporadically. I’d been to see a healer in Maui in mid-2000 and had my first heart opening experience, which is when I suspect my awareness of prana was awakened within.

As Yogi Desai of Kripalu says:

When prana awakens, it has an intelligence all its own and will make your mind and body so some pretty strange things. In yogic terms, this process of awakening prana is called purification.

Awakened prana has the effect of a detergent on your whole being and will leave you balanced, if you let it do its thing. If you try to stop it, you will be left with your fears and blocks as before.

If you surrender to the flow of energy as you experience it naturally, it will always bring you into a harmonious relationship between body and mind.

No yoga teacher I was practicing with ever mentioned prana, and when I cautiously asked a few delicate questions about some of the things I was experiencing, they didn’t ever suggest that this energy I was feeling in my spine was prana.

But it was exactly as Yogi Desai says.

I would lie in the bath, warm and relaxed, and feel this sensation rise up to my spine until it hit a “block”, it would then begin to move slowly around my body in different directions as if searching for something. If I surrendered to it, letting it move my body as it willed, it would seek, and seek, and seek until… CRACK. Something would pop and open and release.

And then it would begin all over again from the base of my spine, next time reaching a millimetre or two higher before it hit the next block.

Back then, prana was rising only into my lumbar spine, barely getting out of my sacrum. The movements of the body were small, and I don’t recall making any connection to the thought processes of my mind. Perhaps there was something going on, but I wasn’t adept enough to witness it.

Later, the physical releases would be accompanied by profound insights into my psyche, healing moments of the mind as an old idea was revealed as being untrue.

Over the last thirteen years, Prana has lead me on a fascinating journey. Initially, it I wasn’t something I ever discussed with anybody, because I was afraid people would think I was crazy. Instead, I observed, paid close attention, and trusted that what ever it was that was spontaneously moving and jerking my body was a good thing. Always knowing, that somehow, this was a part of Yoga.

And these spontaneous movements from within are a part of Yoga.

The yoga that most people practice is usually externally imposed. That is, they see a posture and attempt to move their body into that posture based on what they see, or the instructions they hear. This is where yoga begins for most people.

But it is not where yoga ends. The purpose of this style of practicing is to awaken Prana so it can then take over the practice and lead the yogi through whatever asana is necessary to provide that yogi with balance in his or her mind and body.

When you surrender to Prana, it can take you into a timeless state of consciousness.

Yogi Desai founded Kripalu Ashram in Pennsylvania for the sole purpose of teaching about the awakening of prana as the basis for yoga practice( (although for various reasons, he later changed the way yoga was taught at Kripalu.)

This is where I now feel confident about taking my students too. When I practice at home, it does not look like any class you are likely to have attended. Sometimes the movements are excruitingly slow as prana goes about it’s dance within, seeking out blocks, doing what it needs to do. Sometimes the movements are jerky and rapid. Always, always, always, I am connected to my breath and witnessing the process.

Now, when prana moves about my body, it’s working primarily on the upper thoracic spine, and my hips.

These two areas of the body are intimately connected. It’s also started moving through my jaw which is a fascinating process to watch. At certain times, I find my tongue curling right up into the roof of my mouth as if I am stretching its underside.

What on earth would one call a tongue asana? But there it is, curling of its own volition, and feeling ‘right’.

The awakening of Prana within hasn’t just been about the physical body. There has also been a psychological process, which has at times been harrowing.

There has been a striping away of the defences of the the ego, the illusions of the mind. It wasn’t until I read Stephan Cope’s book,  Yoga and the Quest for the True Self, that I found an explanation for what I was experiencing. It was a great relief.

Finally! Someone else – a psychologist no less – had experienced this process and was able to articulate it.

Since then I have also found Self-Awakening Yoga, The Expansion of Consciousness through the Body’s Own Wisdom – written by another of Kripalu’s senior teachers, Don Stapleton. He also articulates the process whereby the innate intelligence of the body become’s one’s own personal yoga teacher, this time coming from the perspective of creativity (he was an art teacher with a PhD in the process of creativity).

This understanding of what was happening within my yoga practice led to my decision on January 1st of 2009 to commit to a sadhana.

I was finding the psychological aspect of the process difficult, and once I’d read more about it, realised it was time not only to surrender to it, but to support it.

It was time to do what I needed to do in order to purify and strengthen the process. This was a pivotal moment in my yoga journey.

Sodarshan Chakra Kriya is extraordinarily powerful – of that I have no doubt because I have personally experienced its affects. I have watched the change in my ability to witness my thoughts and emotions, and thereby choose my responses to situations. It has not been an easy journey in any way, shape, or form. I have had to learn to accept myself as a whole person – I have had to understand the nature of duality.

Except in the moments when I forget, and get sucked into the drama of life, and forget. In those moments, I don’t get it at all. :-)

But because I was practicing this sadhana every single day, the length of time that I dropped down in the drama and got swept away by my emotions and thought patterns became shorter and shorter.

Back then in 2009, I finally learned to observe the descent into Mind, and just that observation gave me the nano-second I needed to shift away from reacting back into observing. I was then able to ascend back into clarity.

Practicing this sadhana helped me climb out of the duality of good and bad, and into the space of creation where instead of reacting to life, I can create life.

It was an extraordinary process.

Although it was a perspective that took time to integrate. You always think you’ve “got” somewhere, only to discover that there is still further!

I want to thank Anmol Mehta for his generousity and guidance, freely offered through his website, Mastery of Meditation, Yoga and Zen. We’ve never met, and he lives on the other side of the world, but Anmol lead me to the most profound kriya and pranayama over the last seven years. His teachings opened up a whole new world for me, and for that I am grateful.

So this New Year’s, I highly recommend committing to a kriya of your own. There are many on this website, all with different benefits. Here’s a few links to get you started:

How to take your asana, pranayama and meditation anywhere you go

If I Cannot, I Must – Lessons in Ego Transcendence
Scroll to top