Welcome to Part 8 of The Seeker’s Story, where Namit continues his exploration into yoga philosophy and discusses spirituality – what does spiritual mean and what is spirit? 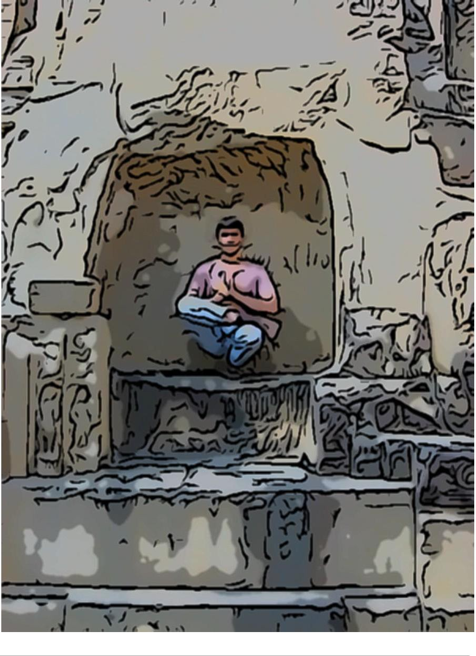 Chapter 9 – What does Spirituality Mean? What is Spirit?

I was now starting to really get a sense of why this land I was on was spiritual. There was a warmth in the atmosphere that I was really enjoying. And I really wanted to understand what spirituality is all about.

What I really liked was the fact that there were always animals around. I had seen monkeys, cows and other animals everywhere. I was really starting to feel a connection to all of nature, to animals and to other human beings. It was easy to feel how the philosophy of yoga, of union was present in this place.

This day I came to yogi ji and he looked so tranquil. He was supporting himself on one foot and holding his hands in a prayer position.

Today he did not reply. He just carried on looking calm. I could sense that he was really keeping his attention focused on his breathing. I assumed that this was part of the meditation that he was doing at the time.

Several minutes later yogi ji awakened from his meditation and sat once again next to me.

‘So what are we going to talk about today Jake?’ he said with a big smile on his face.

‘What does spiritual mean? And what is spirit?’ were my questions for the day.

‘Now those are deep questions Jake.’

‘Well Jake there is a world that goes beyond the atoms and molecules and matter that make up our bodies. It is a world of just feeling.’

‘So our feelings come from a different place than this world of matter that we know so well yogi ji?’

I thought about it for a while.

‘No yogi ji science cannot explain what feelings are.’

‘This is because feelings go beyond the world you can see with your eyes Jake. The place where your feelings of happiness come from is the place of spirit. Being in touch with your feelings and the feelings of others is being spiritual. Being in touch with the good things in this world is called being spiritual. And when you are in this spiritual place Jake you feel so peaceful. You have a kind of feeling of belonging because you feel your connection to everything.’

I thought a lot about this, about how I felt connected to things. There was a welcoming feeling in everything and everyone I had met in this village in India. It felt like there was an automatic connection. I could see goodness and happiness in people. I watched that evening how the Rai’s approached and spoke to each other with so much respect.

It had been explained to me that the typical greeting in India is ‘Namaste’ which means that the light in me bows down to the light in you. People in this place would always great each other with this word Namaste.

I felt that people here had felt the light and love of God and that they were sharing it with each other. I felt this sharing of light and happiness really strongly from yogi ji.