Welcome to Part 6 of The Seeker’s Story, where Namit continues his exploration into yoga philosophy and discusses one of the biggest questions of all – God: Who is he? 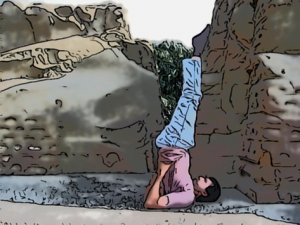 I awoke the next morning thinking about what I could ask the yogi. I wanted a question that was even bigger to me than my question about magic.

Okay I had decided what I was going to ask him. Since I was a kid I had always wondered who God was.

And I had never had a sensible answer from anyone who I had asked. The most common answer that people gave me was that he was the one who created the world. Some people told me that he did not exist and other people told me that he was actually a she! Well I did think it would be interesting to ask a yogi so later in the day I went off to the temple and met my spiritual teacher.

On this particular day I found the yogi with his legs pointing straight above him in an upside down position and supporting himself just on his shoulders again.

‘Yogi ji!’ I said with an enquiring tone.

‘It is good to be upside down Jake once you have had the appropriate teaching. It allows blood to enter the brain so that you have more nutrients there and you can think more clearly. Your thoughts are more peaceful. It also allows blood to return back to the heart from the legs so you generally feel more healthy and more relaxed. Your poor heart is not having to pump blood around the body and legs against gravity and it can relax.’

‘Good to know yogi ji I promise you I will learn one day. Okay yogi ji today I have a big question for you. Is it okay for me to ask now?’

‘Yes of course it is Jake. Just let me finish and then we will sit and chat.’

I noticed that day that yogi ji’s breathing was quite audible and that he was really focusing his own attention on his breaths.

In time yogi ji sat down next to me and we began the discussion for the day.

‘Okay now that is a big question again Jake!’

‘Well I do want to use my time here to learn about some of the answers that come from this spiritual country’ I told him. And that was the truth I did want to learn.

‘I am glad that you think that way Jake. Okay so in my spiritual country which is your spiritual country too because we are all connected, this is what we believe. God is the one with the most love amongst us all. God is the one who shows more forgiveness, mercy and love than you can ever imagine. He cares about everyone infinitely.’ The yogi stumbled. ‘No actually more than infinitely.’

‘Well then why does he allow so many natural disasters to occur?’

‘Jake God is not in charge of the physical things of matter. He is not a God of matter. He is a God of something else. He is a God of spirit, of feelings. He cannot and does not enter the world of matter. In the world of matter people become attached to things of matter, precious objects and when they lose these precious objects they become upset. God cannot enter this world. He is detached from it and that is what allows him to fill himself with love and to send us and give us true love.’

‘So God does not allow all these natural disasters to happen?’

‘Okay so he does love us then.’

‘Yes Jake he loves us more than you can possibly imagine.’

‘Well does he give us any rules or commandments?’ I asked the yogi.

‘No he is a God of love he does not force us but explains with love. He just gives us guidelines for being a good person. Guidelines for good karma, for living a good life, for being good to others. This kind of a life will give you more happiness and more fulfilment. It will really help you to feel the connection to others. But do not care about others so much that you forget about yourself. You are just as important as everyone else and you should allow yourself to feel this way.’

‘Does he judge us?’ I asked yogi ji as I had always felt that this was a fear that people had put inside me.

‘No he just forgives us. This is what a loving God does. If we do feel bad after we have done something bad then it is as a result of our conscience or because of the bad karma that we have created which brings negative results.’

‘What do you mean by that yogi ji?’

‘I mean that if you do something bad then you feel pain from negative actions such as hurting others. You feel their pain too.’

‘Okay that makes sense but what is karma? You just talked about it now.’ I asked.

‘We can talk about this tomorrow Jake. This is another big subject. Tonight you are invited to come to my house for dinner.’

‘Thank you so much yogi ji’ I replied. I was really excited.

His house was small but really clean and filled with the smell of burning incense. I felt really comfortable there. Dinner was nice, rice and a bean curry, but not as tasty as Mrs Rai’s cooking. I kept that bit quiet and simply told the couple that the food was lovely.

The conversation was really pleasant and I felt that I could ask now about why he himself was so interested in yoga.

‘It is the idea of union that I like the most Jake. During my grandfather’s time India was split into two countries, India and Pakistan, and there was so much bloodshed. Hindus and Muslims were killing each other. Every time I hear about this Jake I feel pain inside.’ Yogi ji looked truly upset.

‘I understand yogi ji’ I assured him.

‘The idea of a lack of unity in this world makes me feel so upset. My grandfather would always tell me so many sad stories from this time Jake.’

Yogi ji then took out a small stone which was wrapped in a cloth and tied in a string. He untied the string and unwrapped the stone. There was an image carved in the stone of a man sat in meditation with his feet crossed.

‘My grandfather was born in a little village which is now in Pakistan. The village was called Harappa. One day he was playing near the village and found this old stone. Apparently there is now an archaeological site near his village. This stone has always brought me great peace Jake. Maybe it is a carving of one of the first yogis practising meditation.’

‘Maybe it is yogi ji’ I smiled at him. I really did feel a sense of peace coming from this stone.

‘It is peace I want in this world Jake and unity. When India and Pakistan split my grandfather came to India and settled here in this village. He felt it was a special place.’

I had to agree. The village really lived up to the expectations that my sister had given me. There was natural beauty and a sense of peace everywhere.

‘What do you do in the daytime yogi ji before you meet me?’ I asked because I had been a little bit curious.

‘You remember the school behind the temple ruins?’

‘Yes yogi ji’ I replied. I had seen a school there with children playing during the daytime.

‘I am a teacher there. I teach Hindi and English.’

Hindi is a common language in the north of India and the fact that yogi ji taught English also now made it obvious to me why his English was so good.

‘The Rai’s children are my students’ he continued.

‘Oh!’ I chuckled thinking about how mischievous they could be sometimes.

‘Sharing knowledge with others just makes me feel happy.’

‘I know it does yogi ji’ I smiled. I could tell that every time he taught me something that made me feel happy he felt a sense of inner satisfaction too.

‘Who taught you yoga?’ I then asked

‘My father and my grandfather mostly Jake. Yoga has been in our family for generations but I think my grandfather was the one who took it the most seriously because of what he had seen.’