Welcome to Part 14 of The Seeker’s Story, where Namit continues his exploration into yoga philosophy. This week, he discusses why yoga is not a religion but philosophy.

Chapter 13:  Why a State of Balance is Important for Enlightenment

Chapter 14:  What are the Eight Limbs of Yoga? 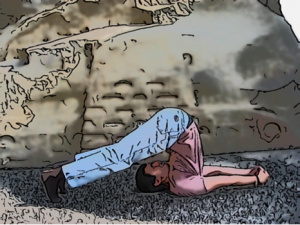 The next day came and I found yogi ji with his shoulders rested on the ground of the temple and his legs above and behind him. I waited until he noticed me and then I sat down. A few moments later yogi ji came and joined me and sat down next to me.

‘Yogi ji why are there so many religions?’

‘Because there have been many spiritual teachers Jake.’

‘Well then is any one particular religion right and the others wrong? Or do they all follow the same God?’

‘Yoga sees the world as one big family Jake. It sees no separation of country, class, creed, religion. It sees us as all connected.’

‘So yoga people do not believe in religion?’ I asked curiously.

‘It is more that in religion there is a divide between people of different faiths. It is the divide that yoga people do not believe in. A yogi will always see that others have the same goodness inside them and that we all have a connection.’

‘So if religion creates a divide between people then this means it is wrong to be religious and that we should not respect religion?’

‘No Jake it means that we should respect that the other person in their own religion has the same love for goodness that we do. We are all connected. We cannot dislike someone for following a good path. What we do is we avoid looking at divides and we just look at connections.’

‘Oh you give me headache Jake! Go on then!’ he giggled.

‘So is yoga related to religion?’

‘No Jake religions started to become organized by human beings some two to three thousand years ago. Yoga goes back at least four thousand years. It is more of a philosophy. There is no governing pope, pontiff or priest. In fact it is not really concerned with any hierarchy at all, just everyone being equal and living in unity and in harmony.’

‘What is hierarchy yogi ji?’

‘Someone at the top. Yoga believes that we all have the same rights and essentially the same right to be in our original state of happiness.’

‘So do I’ replied the yogi.

‘Faith in God is not a prerequisite for spiritual development.’

‘Explain what you mean yogi ji?’

What is Maya, or Illusion?

Words of Wisdom from a Nobel Prize Winner: Andre Gide
Scroll to top