Our popular contributor Kara-Leah takes some inspiration from a novel she’s been reading to better understand plank pose, proving that we can learn about yoga in all sorts of interesting places. 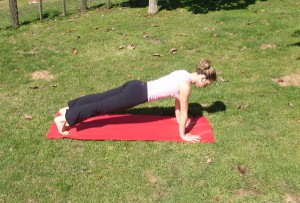 In the novel I have just finished reading (and highly recommend) – People of the Weeping Eye by W. Michael Gear and Kathleen O’Neal Gear, one of the main characters is a “Contrary”.

She goes by the name of Two Petals, and ever since her mother died, has had trouble staying grounded in reality. She hears voices, sees visions, and is overwhelmed in crowds because she connects with every single person’s soul.

What makes Two Petals a Contrary is that everything is also backwards for her.

She talks opposite to what she means. When something great is about to happen, she talks about how awful it will be. When you want her to leave the room, you must tell her to stay put. She is a challenge for anyone who comes across her, until they begin to understand how she works. But Two Petals is also possessed with great power (she kills a man just with her breath), or, as the story puts it, Great Power possesses her.

I was reminded of Two Petals yesterday at yoga class as I held my yoga students in plank pose for five breaths. Plank asks us to draw upon our inner strength. We are asked to hover an arms length above the ground in a flat position like a piece of two by four. It’s the pose where people often sag through the lumbar spine, or through the shoulders.

When I cue this posture though, I’m not asking my students to lift up, or to hold them selves up either. What makes this posture works – how you can feel like you can float in it forever – is by pushing DOWN.

In effect, doing the opposite action that is required. It’s Contrary.

When we push down through our hands, and back through our heels, we also squeeze our inner shoulder blades together down towards the tailbone, which is lengthened towards our heels. These downward and length-ward forces press into and along the earth, triggering a response – an equal and opposite force which reverberates up and holds us effortlessly in the pose.

We begin to feel like we’re flying in plank pose, and we could fly here for a long time. Arm strength, and abdominal strength becomes almost secondary – they happen as a result of the downward pressure through our arms and the length-ward extension of our tailbone.

This method of accessing lift holds true for ALL the arm balances. We access prana and power when we press down into the earth and feel ourselves lifted up into the sky. Without the ability to press down – to connect to the earth – we are unable to reach for the sky. To go up, we must first go down, and this generates the power necessary.

There’s plenty of other examples in yoga where this applies too – postures when the ability to press down into the earth helps us fly up toward the sky. It also helps us keep our body safe because pressing down through our foundation keeps us lifted out of our joints.

Think about Crescent Lunge, when the back knee is down on the ground. It’s really easy to sink down into this posture as we release the back thigh and hip to the ground. However, what really creates lift and freedom in Crescent Lunge is our ability to ground through our front heel and connect down though the back shin and top of foot. 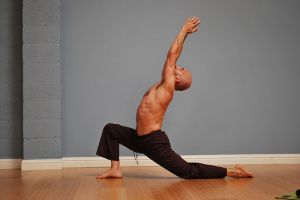 Creating an active relationship between ourselves and the ground, through our foundation, allows gravity to rebound up through our limbs and joints so we feel like we’re flying.

So next time you’re practicing yoga and you’re in a posture that’s challenging for you to hold up, shift your thinking and instead of focusing on holding yourself up, focus on grounding yourself down. That’s the contrary concept. See how it feels, and how it shifts your practice.

You may even feel, just like Two Petals, as if Great Power is possessing you :-)

What is the Ego?
Scroll to top